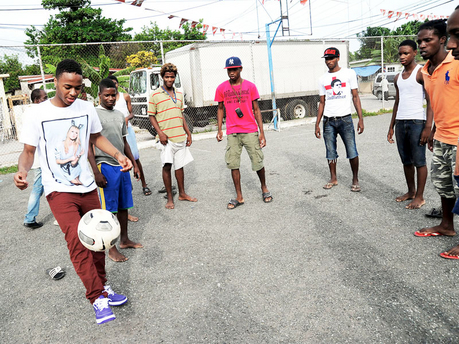 He is only 17yrs. old and hails from the tough corporate area community of Maverley, But Raheem shoulders daily with soccer superstars, Including Jamie Carragher, Louis Suarez and England captain Steven Gerrad.

He is quickly becoming a fan favorite at Anfield the home of one of the biggest soccer club in the world, Liverpool F.C. and already represented England in a number of age-group tournament.

But months away from his 18th birthday he remains the shy unassuming young man who left Maverley Kgn. 20 just over 10 yrs. ago.

Sterling returned to Maverley to attend his Granfather's funeral, Followed by a large group of young man, one would never know that he has already attracted j$40 million tranfer fee.

His presence in Maverley over the past two weeks gave the community a huge lift as the young man whom they played street scrimmage with was emerging as one of the rising stars in world soccer. They hung on to his every word even though he did not say much and tried to copy his every move as they juggled a soccer ball in the park metres away from his house on Reapers road where he spent hie early years.

He is definitely a positive influence, His mother Nadine told the gleaner more than a year ago, she even suggested to him that when everthing is settled and the time is right , It would be great for him to go back to  Jamaica to his former school in patticular and talk to the kids about not giving up on their dreams and working hard for success and stuff like that his mother said.

Raheem influence was clearly obvious as the young and not so young men dusted off their boots 'the Big Man is here' and we so proud of him, One young man said, i watch every Liverpool match.