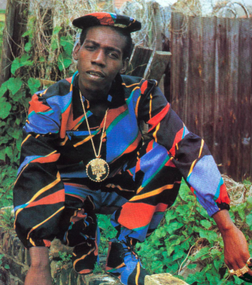 His name was given to by Barry G who thoght he sounded like a general with three voices, Around 1981 Sassafrass made one of Black Scorpio most important discovery when he heard  Trees deejaying in his place of work, Sassfrass took trees to meet Scorpio who was also impressed with trees deejaying talent.

General Trees learned a lot from Sassfrass, but it soon became clear that his verstile, rockstone delivery going to make him Black Scorpio's lethal weapon in "The Dancehalll Arena"

By 1982 Sassafraas was spending a lot of time working on sounds in New York and stage shows in Europe, so the discovery of General Trees by Sassafrass kept Black Scorpio rising, and one of the top sound system in the dancehall.

The Black Scorpio set became known as "The Horseman Sound" as it has has had a long association horse racing, with Jack at time owning racehorses  and Sassafrass having worked with his father and racehorse trainer Cecil Johnson at Jamaica's premier race course Caymanas Park, Sassafrass is often known as "The Original Horseman" while General Trees is refered to as "The Younger Horseman".

General Trees is widely regarded as the best speed rapper of his era, General Trees had hits like "Mini Bus" "Gone A Negrli" and many more, Trees still performs on stage shows in the USA and Europe.