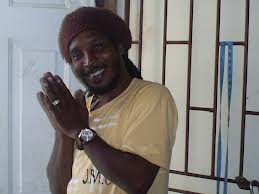 Echo Minott was born Noel Phillips in 1963 and grew up in the Maverley area of Kingston, Jamaica. He started singing from an early age, appearing in local talent contests and school concerts.

His first break came in 1980 when he recorded the album "youthman Vibration. This album wasn't released in Jamaica and appeared on the Starlight label based in London, UK.

Now in demand as an increasingly popular dancehall singer, Echo began recording for many other producers and scored his first Jamaican no. 1 single Love Problems" produced by Joe Gibbs. He followed this with another hit, "Farmer Man" for "Junjo" Lawes' Volcano Records label.

It was in 1985 that Echo Minott finally became an international reggae star with monster hit "Lazy Body", released on the Black Scorpio label, It was number one all over the raggae world and led to a whole album of versios to the rhythm. At this time, Echo was a regular member of Jamaica's top sound systems Black Scorpio and King Jammys. It was with Jammys that Echo was to have his next hit singles.

"Original Fat Thing" and "Put One Hand On The Key" were enormous hits on Jammys new revolutionary Sleng Theng rhythm track, Echo hit again in 1986 with the extraordinary track "What The Hell" , also for the Jammys label which remained top of the Jamaican charts for three months, This was the first ever to use the raggamuffin beat of today's dancehall and was an extremely contro versial song that inspired many answer versions such as the hit "Babylon Boops" by Lovindeer.

This led to hisown part two version "Me and My Girl Gone Back" which was another international reggae hit, King Jammys followed these hits with "What the Hell" album and also another big hit "Emmanuel Road, Echo had many other hits like "Been Around The World", "Whip Appeal" Echo Minott still remained a household name within the reggae scene, Echo left Jamaica in 1992 to New York and immediately had a massive international number one reggae hit with "Murder Weapon" Echo now lives in France.